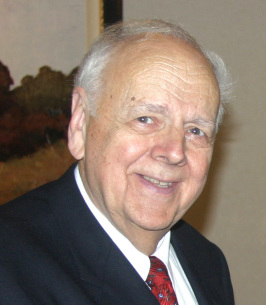 At Eau Claire High School, Arthur was dubbed “Einstein’s newest competitor” by his senior class.  Art earned his Bachelor’s degree in Physics at the University of MN, and his Masters and Ph.D. in Physics from the University of WI, Madison. Art married Beatrice M Bruvold in October, 1955. Together they lived in Falcon Heights, Minnesota; Madison, Wisconsin; and then White Bear Lake, Minnesota, ultimately settling into their long-time residence surrounded by nature on the shore of Bald Eagle Lake. Art and Bea spent many days of summer at their lovely cabin on the North Shore of Lake Superior, near Lutsen, MN. They adored their time at this scenic lakeside retreat, and passed this tradition down to their children and grandchildren. More recently they spent several winters at their desert home at Quail Creek in Green Valley, Arizona.

Art treasured his wife and was an adoring father and grandfather. He was kindhearted, generous, and extremely witty. Art was a brilliant scientist. During his accomplished career as a research physicist at 3M, he was named Corporate Scientist. In 1978, he was inducted into the elite Carlton Society “for his many contributions and innovations in the field of graphic reproduction, including electron beam recording… and electronic reproduction systems; for his technical leadership in encouraging the development of pioneering technologies; for his achievements in developing the technical and creative talents of his colleagues.” Art’s primary retirement hobby was astrophotography, allowing him to continue his lifelong hobbies of astronomy and building electronics.

Art’s gentle and wise soul touched many lives and was a role model for many. He will be dearly missed.

We encourage you to share any memorable photos or stories about Arthur. All tributes placed on and purchased through this memorial website will remain on in perpetuity for future generations.

Love, Dennis Kotz & Christine Kotz McGinty sent flowers to the family of Arthur Rudolph Kotz.
Send Flowers
DK
To my dear cousins Art, David and Kim. Your father was a favorite uncle that I always considered such a gentle soul. He will be missed, but always there. he was only in his 20's when he would come out to our house in Wayzata, to help my dad repair our vacuum tube television. I thought he was a magician, looking at an oscilloscope and detecting bad components. Invariably he would bring some carbon paper to further fascinate me, but he was an undisputed Magician. My fascination was further peaked at the reception for my dad's memorial service, where he clarified an article I had read about the echoes of the Big Bang and the critically controlled expansion of the universe. I confirmed the Magician and added genius. Stay strong cousins and may God be with you.

We are saddened to hear about the passing of Uncle Bud. Our family will keep your family in our thoughts and prayers.
Love, Dennis Kotz & Christine Kotz McGinty - Monday January 10, 2022 via Heartfelt Sympathies | Order flowers in memory of Arthur
Share This:
1
Page 1 of 1
Share
×