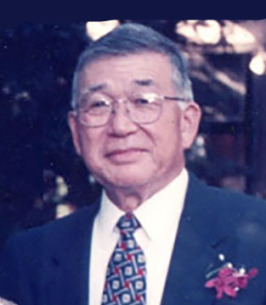 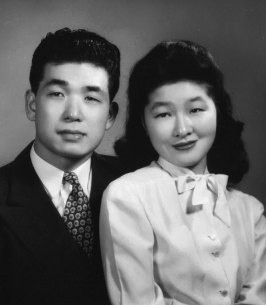 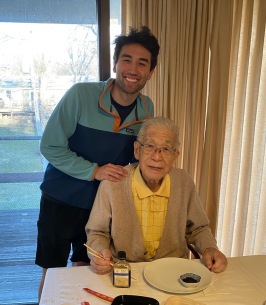 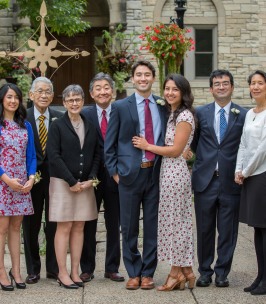 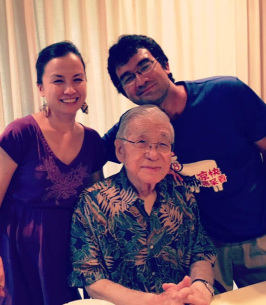 Memorial Candles Lit for Yoshio | SEE ALL
Light a Candle
"We are honored to provide this Book of Memories to the family."
— Mueller Memorial Funeral and Cremation Services
Funeral Details Memory Wall Photos & Videos Send Flowers

Print
On June 3, 2021, Yoshio Matsumoto passed away after a remarkable life at the age of 99.

Yoshio was born to Ryoichi Matsumoto and Yoshi Yabuki Matsumoto on July 12, 1921 in San Diego, California. He left San Diego to attend the University of California Berkeley. It was there that he first met the love of his life, Alice Abe. In 1942, he was evacuated to internment camps along with other Japanese Americans living on the West Coast. Yoshio and Alice were both sent to Tanforan Racetrack and while there, they began to talk and go on walks together, fostering a relationship that would truly stand the test of time. With the assistance of the National Japanese American Student Relocation Council, Yoshio was able to leave the internment camp to continue his education at Washington University in Saint Louis where he graduated with a degree in engineering in 1944. Soon after his graduation, he joined the US Army. Before being sent to Germany, he and Alice were married on September 14, 1945.

Upon his discharge from the army in 1946, he joined Alice in Detroit where his family had relocated after being released from the internment camps. There, he and Alice welcomed their three sons, Steven, David and Joseph.

In 1961, they relocated to Saint Paul when Yoshio was offered a job with 3M Company. He worked there for over 20 years before retiring in 1987. During his career at 3M, he traveled to many different countries and had a lifelong love of travel, taking many adventurous trips accompanied by friends and family members, even into his eighties.

Yoshio and Alice were active in their church community. He was a member of the United Church of Christ in St Paul for 60 years. They were active in the Twin Cities Japanese American community from the Japanese American Citizens League to the Como Japanese Garden Club, the St Paul-Nagasaki Sister City Organization and the Japan America Society of MN. They enjoyed the arts and frequently attended performances at the Guthrie Theater, the Minnesota Orchestra and the St Paul Chamber Orchestra, as well as being members of the Walker Art Museum and the Minneapolis Institute of Arts. From their early experience of injustice, they were firm supporters of civil liberties and social justice and were involved in the Nisei Student Relocation Commemorative Fund, which awarded educational scholarships to students from underserved communities pursuing higher education.

Alice died on January 11, 1997. In the later decades of his life, Yoshio remained devoted to his family. He and his grandson Peter lived together for 20 years and in the last few years, his son Joe joined this multigenerational household. He doted on his granddaughters Molly and Martha, who reminded him of his beloved Alice. He was happy that his nephew Larry and niece Rachel came to live in the Twin Cities and visited him often. He loved to host friends and family at his home. He enjoyed fine dining and had eclectic and refined taste. He loved wine, scotch, tamales, Neapolitan pizza, tempura and unagi and had high standards for each. He walked at the Mall of America with a group of close friends three days a week. He was extremely proud of his Japanese heritage and Japanese American identity as a Nisei. He remained in contact with his Yabuki cousins in Japan and his friends from Cal Berkeley throughout his life. A highlight for him was receiving an honorary diploma from Cal in 2009, along with other Japanese American students who were forced to leave due to the internment.

Yoshio enjoyed excellent health into his late 90s. Family and friends marveled at how well he was doing for his age. He adapted with agility to the tremendous technologic changes in the span of his lifetime, being the first one in the family to have a smart phone. He was blessed to have tremendous support and devotion from his family as his health declined at the end of his life.

His family mourns the loss of their beloved patriarch, Yoshio, which means ‘Righteous Man’. He embodied this quality throughout his life in his devotion to Alice and his family, his commitment to justice and his involvement in his community. His family will remember his quiet and dignified presence, his unflappable nature, his sharp mind, his discerning taste and his generous hospitality.

Yoshio is survived by his sons, Steven, David (Diane) and Joseph (Jane); his grandchildren David, Molly (Joseph Spagnola), Martha and Andrew (Casey Colodny), as well as many nieces and nephews. He is preceded in death by his wife Alice Abe, his daughter-in-law Susan, his grandson Peter, his sisters Tamiko and Michiko, his brother Kazuo and his parents.

A memorial service for his immediate family will be held this week at United Church of Christ in Saint Paul. There will be a memorial service later this year at the time of his interment at the Japanese Cemetery in Colma, California.

I have fought the good fight, I have finished the race, I have kept the faith. 8 Now there is in store for me the crown of righteousness, which the Lord, the righteous Judge, will award to me on that day—and not only to me, but also to all who have longed for his appearing. 2 Timothy 4:7-8

We encourage you to share any memorable photos or stories about Yoshio. All tributes placed on and purchased through this memorial website will remain on in perpetuity for future generations.

Provide comfort for the family of Yoshio Matsumoto by sending flowers.
Send Flowers

Da Hane Family of Alameda - Monday July 12, 2021 via Donation
To: NISEI STUDENT RELOCATION COMMEMORATIVE FUND
Share This:
AC
Dear Joe, Jane and Family , We are so sorry to hear of your loss. He was a wonderful man and will be missed. Love and hugs to you all. The Conrad’s Annie, Jim, Abby and Molly
Ann Conrad - Wednesday June 23, 2021 via Condolence Message
Share This:
PW
As the president of the board of directors of the Nisei Student Relocation Commemorative Fund (NSRCF), I want to extend on behalf of the members of the board to the family and friends of Yoshio our heartfelt condolences. He clearly lived a life of purpose, valor, and accomplishment, making his family and friends and community better through his good works. He has for years joined with other family members and friends in supporting those who assisted him during the time of his unjust incarceration during World War II to get an opportunity to leave the barbed wire camps and pursue a college education in the Midwest. He never forgot the strangers who contributed to his great opportunity. Through his support of the NSRCF he returned many times over the kindness extended to him. I had the pleasure to meet Yoshio a few years ago while visiting Minneapolis when the fund was giving scholarships to Southeast Asian and Somali college goers in the Twin Cities area. I admired so much his dedication and commitment to not forgetting what had been done for him by returning the favor to whom he now was the unknown stranger reaching out to young people in need. His legacy will live on in the accomplishments of students like him who have been assisted during their time of need. What a wonderful legacy. Our thoughts are with his family and friends and all who were touched by Yoshi’s humanity and kindness. Best, Paul Watanabe
Paul Watanabe - Sunday June 13, 2021 via Condolence Message
Share This: